Etar (from Arabic: إِيتَار) is an open source material designed calendar made for everyone!

Well, I wanted a simple, material designed and state of the art open source calendar that anyone can make better.

The application is an enhanced version of AOSP Calendar. Without the help of Free Software for Android team, this app would be just a dream. So thanks to them!

How to use Etar

Store your calendar on the phone only:

Sync your calendar to a server:

The following link provides a tutorial how to use Nextcloud + DAVx5 + Etar.

On Android there are "Calendar providers". These can be calendars that are synchronized with a cloud service or local calendars. Basically any app could provide a calendar. Those "provided" calendars can be used by Etar. You can even configure in Etar which ones are to be shown and when adding an event to which calendar it should be added.

Licensed under the GPLv3: https://www.gnu.org/licenses/gpl-3.0.html Except where otherwise noted.

A better calendar for Android 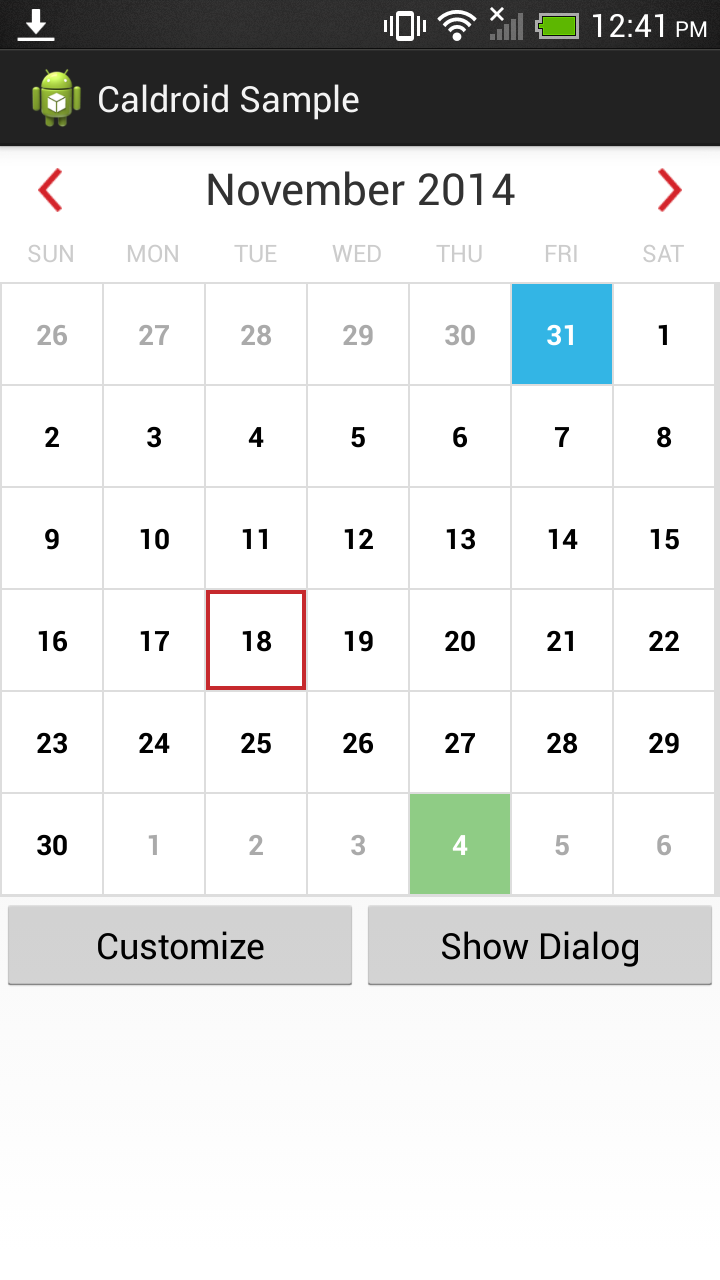 Caldroid Caldroid is a fragment that display calendar with dates in a month. Caldroid can be used as embedded fragment, or as dialog fragment. User ca

Standalone Android widget for picking a single date from a calendar view. TimesSquare for Android Standalone Android widget for picking a single date from a calendar view. Usage Include CalendarPickerView in your layout XML.

An android library which provides a compact calendar view much like the one used in google calenders. 📅 CosmoCalendar is a fully customizable calendar with a wide variety of features and displaying modes. CustomizableCalendar is a library that allows you to create your calendar, customizing UI and behaviour

This is a demo project that showcases a horizontally laid out calendar that shows events in a timeline fashion. It is not a library, just a reference implementation for curious developers.

A simple calendar with events, customizable widgets and no ads.

Kmpcalendar - A calendar library and views written for kotlin multiplatform Calendar - A component for compose desktop Android Week View is an android library to display calendars (week view or day view) within the app. It supports custom styling. Android has built-in date and time handling - why bother with a library? If you've worked with Java's Date and Calendar classes you can probably answer this question yourself, but if not, check out Joda-Time's list of benefits.

An adaptation of the JSR-310 backport for Android.

ThreeTen Android Backport An adaptation of the JSR-310 backport for Android. Attention: Development on this library is winding down. Please consider s

TrueTime for Android Make sure to check out our counterpart too: TrueTime, an NTP library for Swift. NTP client for Android. Calculate the date and ti 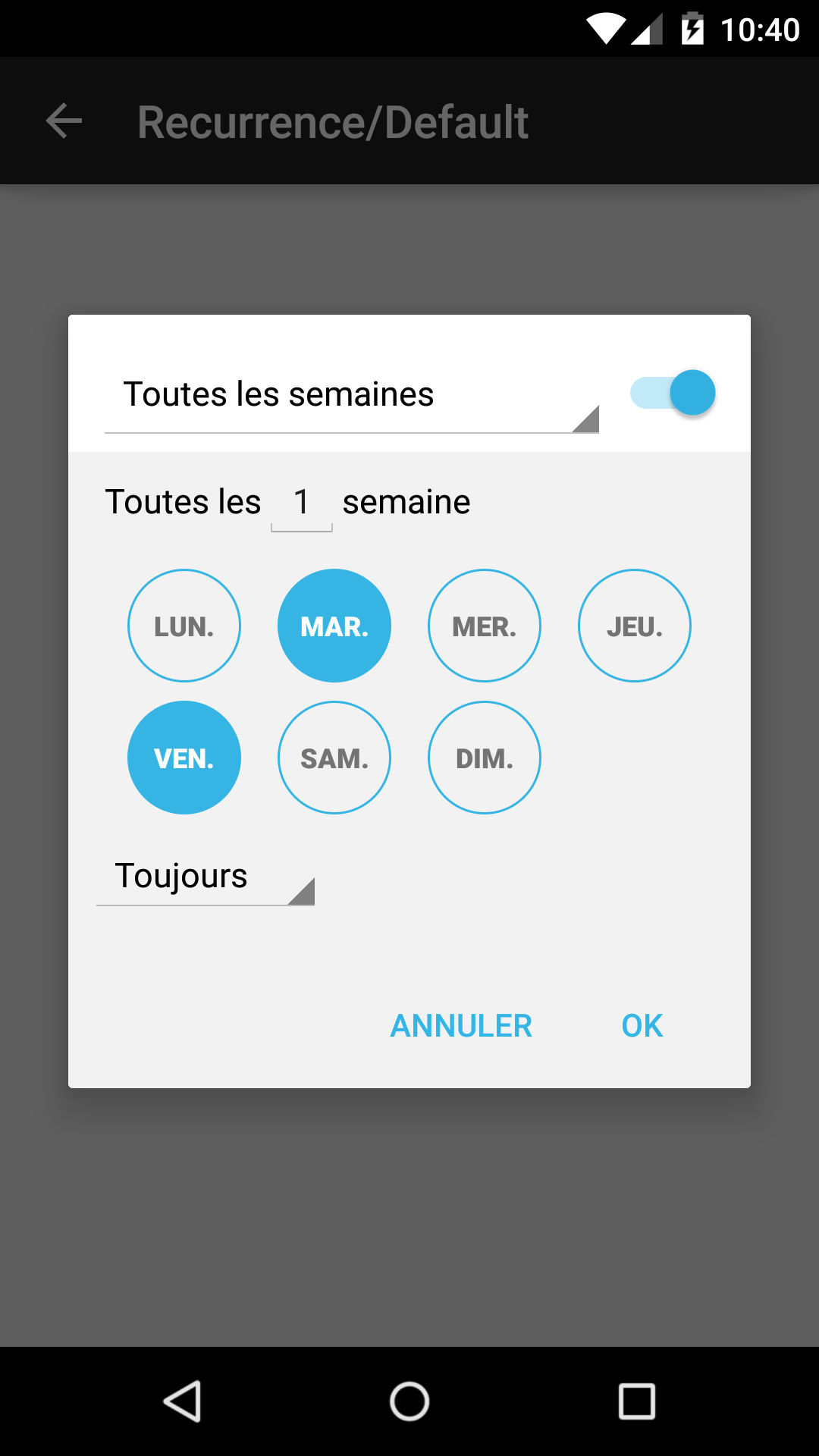 DialogFragments modeled after the AOSP Clock and Calendar apps to improve UX for picking time, date, numbers, and other things.

A material-styled android view that provisions picking of a date, time & recurrence option, all from a single user-interface.

SublimePicker A customizable view that provisions picking of a date, time & recurrence option, all from a single user-interface. You can also view 'Su

Pick a date or time on Android in style 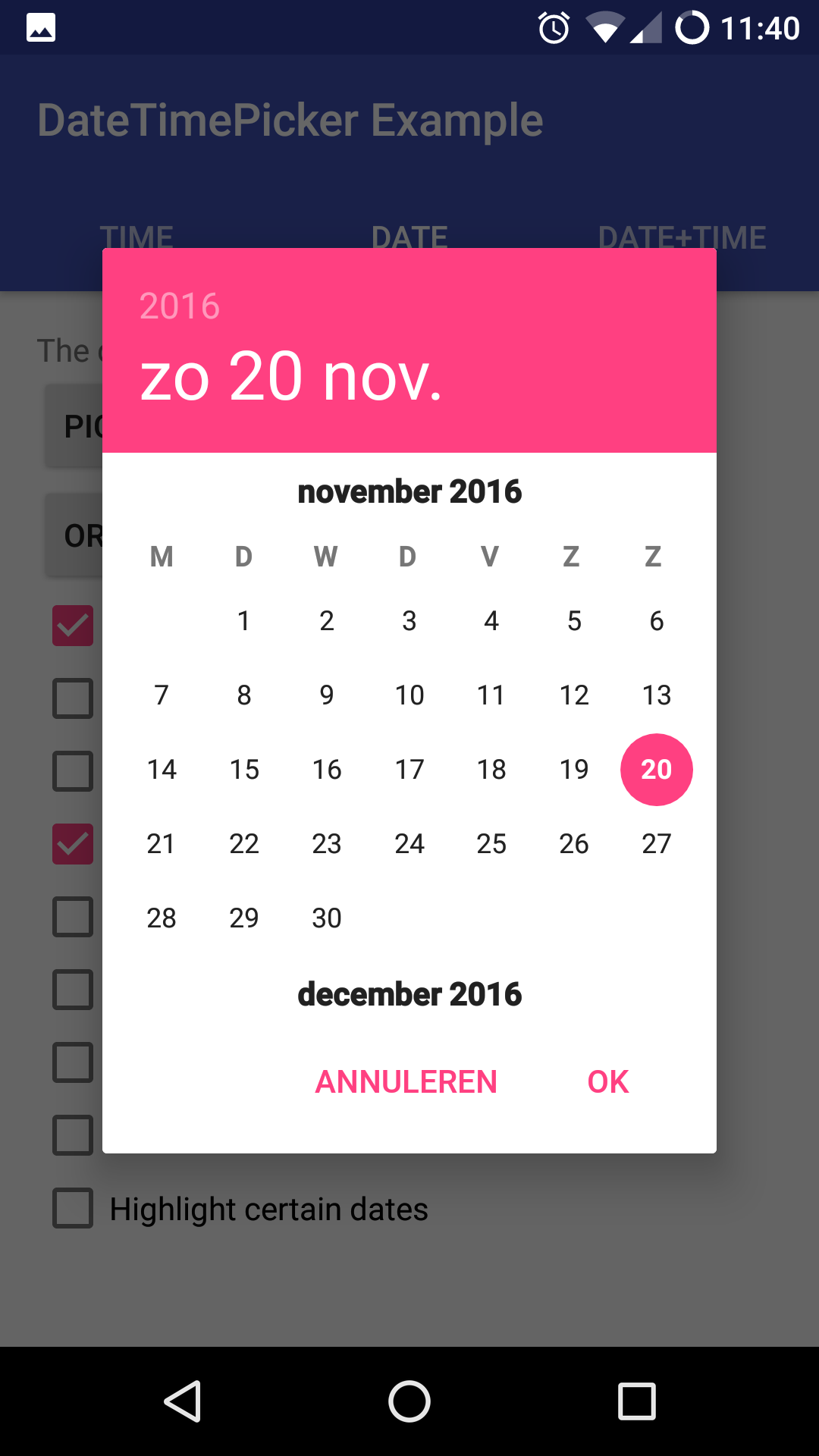 A Material design back port of Android's CalendarView

Material Calendar View A Material design back port of Android's CalendarView. The goal is to have a Material look and feel, rather than 100% parity wi